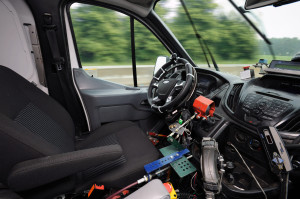 At Ford, robots have begun to replace some human drivers when road tests are considered too strenuous for humans.

The US car maker said it is using robots in a pilot program for durability testing of its new full-size Transit van. The vehicle will be launched in 2014.

"Some of the tests we do on our commercial trucks for North America are so strenuous that we limit the exposure time for human drivers," said Dave Payne, manager, vehicle development operations at Ford. "The challenge is completing testing to meet vehicle development time lines while keeping our drivers comfortable."

Ford said using robots speeds up durability testing, while at the same time freeing up drivers for other programs.

In the pilot program, robotic modules are installed in test vehicles to control vehicle steering, acceleration and braking. The modules are set to follow a preprogrammed course, and the vehicle’s position is tracked via cameras in a central control room. Engineers have the ability to halt the vehicle in case of Â a problem and on-board sensors can order a full stop if a pedestrian or other vehicle strays into the path.

Ford worked with a Utah-based company, Autonomous Solutions, to design and manufacture the software and components that enable autonomous, robotic operation of the test vehicles.