Automated driving gets a boost as Bosch joins research project 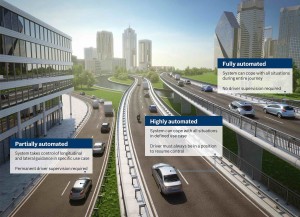 Many requirements need to be met for autonomous driving (Photo: Bosch)

Robert Bosch said it has joined a German research product aimed atÂ speeding up the development of automated-driving technologies.

The German automotive supplier group said Ko-HAF, as the project is called, wants to help develop cars "in which drivers no longer need to be constantly vigilant." Ko-HAF is a German-language acronym that stands for "Cooperative Highly-Automated Driving."

Ko-HAFÂ Â members areÂ automakers, automotive suppliers, and highway administration and research partners. Audi, BMW, Mercedes-Benz and Opel are part of the initiative. The project's total funding of 36.3 million euros, with almost half coming from the German government. The project will run until November 2018.

The Ko-HAF initiative, which was launched on June 1, 2015, is coordinated by supplier Continental.Â The project will develop technologies that will allow automated vehicles to communicate with each other and know exactly where they are in a highway lane.

Bosch said it hadÂ assumed primary responsibility for developing a backend solution for capturing and relaying information about a vehicle's surroundings. That information will go into an expanded digital map that will then be made available to vehicles.

According to an Audi press release, Ko-HAFÂ focuses on:

Despite theÂ many requirements to be met before autonomous driving becomes a reality, participants are confident the project will achieve its aims. "The reÂ­search initiative takes us a major step forward in the direction of automated driving, with road safety at the highest level being its essential basis," said Stefan Lueke, the Continental executive who coordinates the project .