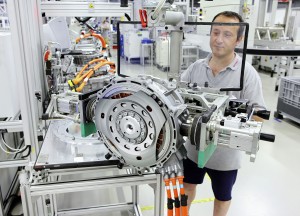 The two companies said in a press release that the cooperation, which is subject to regulatory approval, will operate under the name EM-motive GmbH. It will be headquartered in Hildesheim, Germany, where it will also produce the motors. Bosch already builds electric motors there.

Engineering will be done at a site in the Stuttgart area, where both Bosch and Daimler are located.

Herbert Kohler, Daimler vice president in charge of advanced engineering, said key technologies for electric vehicles needed to be developed in Germany so the country's industry can stay competitive.

"Like lithium-ion batteries, electric motors are key components for our electric vehicles,"he said. "It is extremely important that competence in this field is maintained in Germany."

Added Wolf-Henning Scheider, a Bosch board member: "This alliance is an investment in securing the future of the European automotive industry."

The two companies said the aim of the 50-50 joint venture is to pool competencies and exploit synergies, "and as a result to accelerate the development of premium traction motors for electric vehicles with battery, fuel cell, or range extender."

Electric-motor production is sheduled to start in early 2012. They will be used in Daimler's Mercedes and smart models that same year, starting with the new generation of the smart fortwo electric drive.

The jointly produced electric motors will have a modular design, which means they can be installed in a wide variety of electric vehicles. The motors will be sold to third parties by Bosch. According to current plans, the venture will have built more than 1 million motors by 2020.