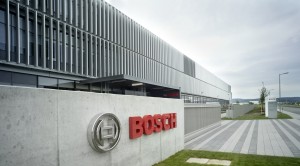 The automotive supplier will coordinate its global photovoltaics activities from the 382,000 square meter facility. Bosch's solar energy division headquarters brings togetherÂ research and development departments, the production of solar cells and modules, and a training center.

Bosch, the world's largest automotive supplier has targeted solar energy as a growth area as it strives to reduce its dependence on the auto industry

The expanded complex in Arnstadt, which Bosch acquired when it took over Erfurt-based Solar Energy AG in 2008, is also partly powered by solar energy. In the administration building, Bosch said aÂ total of 620 slats furnished with thin-film solar modules are attached to the building's faÃ§ade, where they generate power and provide shade.Â The top floor's hallway ceiling is made of semi-transparent solar elements whose built-in cells not only generate electricity but also act as a source of natural light.

Overall, photovoltaic arrays have a combined power rating of over one megawatt and will produce some 1million kilowatt hours of power annually. Bosch said that's enough to cover the entire electricity needs of the offices in the headquarters building.

The new facility will also mean an increase in local staff. Â "Three years ago we started with just under 1,000 associates. By 2012, this figure will have quadrupled,” said Holger von Hebel, president of the Solar Energy division.

Bosch Solar Energy AG is part of Bosch's Solar Energy business division. The unit, which employs about 3,000 people and expects to have sales of more than 1 billion euros this year, builds photovoltaic products ranging from small plants for single-family homes to finished large-scale photovoltaic projects. It also makes solar cells and modules for producing electrical energy from sunlight.

Bosch is currently building another module production facility in VÃ©nissieux, France, which will go into production at the start of 2012. And at the end of this year, construction work is scheduled to start on a further integrated plant in Batu Kawan, in the Malaysian state of Penang.