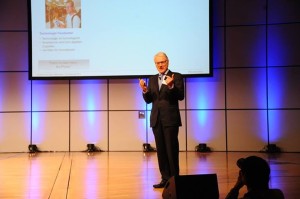 FRANKFURT - Different methods for integrating smartphones in the car will continue for years before an eventual standardization takes place, a senior Daimler executive said Wednesday.

"Unfortunately, we'll have to suffer many systems until one standard wins the day," said Peter Haeusermann, head of electronics and telematics at the German premium car maker.

In an address to the Mobility 3.0 Congress here, Haeussermann said the integration of smartphones into the automotive environment in many ways is "a battle between the consumer electronics industry and the established world of the automakers." In the end, there will be room for both, he said.

The Daimler executive said the auto industry is dealing with a new kind of consumer, which he referred to as "digital natives." These consumers are permanently connected, rely heavily on their online communities and want seamless connectivity to be available in the car as well. Haeusermann summed up the attitude as: "I don't want life to stop when I get into a car."

Haeusermann said connected cars will have both embedded and smartphone-based connectivity. "There will be growing integration of smartphones and embedded systems," he predicted.

Mercedes has developed the MyMercedes platform in recognition of the increasing role of the car as "another device in a customer's network." MyMercedes allows customers access to their cars at any time.

Haeussermann said the smartphone will play a key role in tomorrow's personal mobility. Said the Daimler executive: "It will be the central identification device." He also cited other key roles for the smartphone, including managing a car and making bookings.

The Mobility 3.0 Congress is organized by the automotiveIT Group. It is held annually and brings together around 400 executives from the automotive and IT industries.