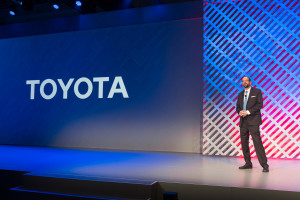 LAS VEGAS - The new CEO of the Toyota Research Institute (TRI) said there is a lot of hard work to be done before driverless cars can be commercialized.

"Although the industry has made great strides over the last five years, we are a long way from the finish line of fully automated cars," said Gill Pratt, who runs the research organization.

Pratt was speaking at the CES consumer electronics exhibition, where much of the talk on the press day centered on the new technologies that should make autonomous driving possible.

Toyota will invest 1 billion dlrs over five years in TRI projects that focus on artificial intelligence (AI) and robotics. Pratt saidÂ AI is essential if autonomous driving is to become reality.

"Most of what has been collectively accomplished has been relatively easy because most driving is easy," he said. "Where we need autonomy to help us, is when the driving is difficult. And it's this hard part that we intend to address."

TRI, which is setting up offices in Silicon Valley and Boston, has four initial mandates:

Pratt has put together a team of experts to run the various research projects. They include senior academics and various experts in autonomous driving, robotics, computer science and other relevant disciplines.