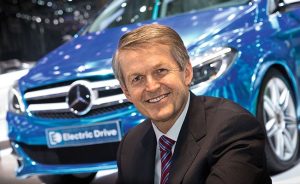 "We will bring Google Auto into the car, Â but we are looking for an agreement that we can accept," Daimler's R&D boss, Thomas Weber, said in a recent interview. Weber cited "intensive talks" with the Google consortium that focus on data privacy. "We don't accept all the general conditions that would require us to voluntarily make all our customer data available," he said.

The OAA was founded last year to bring Google's Android platform into the car. Major car companies, including Audi, Ford, Fiat, Renault and Nissan, are members, but two of Germany's top premium car brands, Mercedes-Benz and BMW, are notable holdouts.

BMW's head of sales and marketing, Ian Robertson, said in an interview at the Detroit auto show in January, that data privacy is also one of the key concerns for the Munich-based group as it considers joining the alliance.

For Daimler, it's clear that the integration of Android smartphones in Mercedes vehicles is important. "You don't get around the Google operating system," Weber said, citing the dominance of Android in the global smartphone market.

Daimler had originally planned to join the Google alliance 2014. Weber said the delay isn't unusual when it comes to implementing technologies from the consumer electronics industry. Said the Daimler board member: "It's a lot of work to make something automotive-grade."