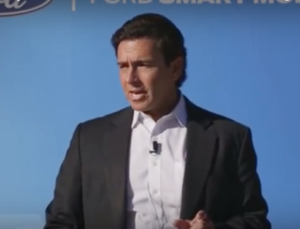 Ford Motor, setting an ambitious new-mobility target, wants to have autonomous vehicles on the road in a ride-sharing or ride-hailing service by 2021.

The US carmaker said last week that it is investing in or collaborating with four startups to speed up autonomous-vehicle development. It also is expanding its Silicon Valley R&D operations for the purpose.

“The next decade will be defined by automation of the automobile, and we see autonomous vehicles as having as significant an impact on society as Ford’s moving assembly line did 100 years ago,” Ford CEO Mark Fields said in a speech last week.

Ford’s first autonomous vehicles are being planned without steering wheel, gas or brake pedal. "A driver is not going to be required," Fields said.

The cars will be specifically designed for use in commercial mobility services such as ride sharing and ride hailing and will operate in geo-fenced areas.

Despite this initially limited use, Ford pledged that the vehicles will be available in high volumes.

Ford is tripling its autonomous-vehicle test fleet this year to 30 self-driving Fusion Hybrid sedans in California, Arizona and Michigan. Another tripling of the fleet is planned for 2017.

To have access to the systems required for driverless driving, the carmaker is investing heavily in key technologies such as advanced algorithms, 3D mapping, LiDAR, and radar and camera sensors. As part of this stepped-up R&D effort, it: