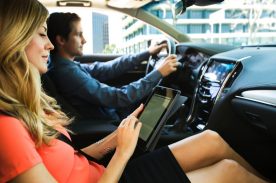 General Motors said a Cadillac brand model it will start selling this year in China will mark the beginning of its rollout of fast 4G telematics systems in the world's biggest car market. The connectivity will be provided by China Mobile, the country's largest wireless company

The faster mobile communications will improve GM's existing OnStar service, which was introduced in China in 2010. GM said it will eventually have 4G capability in all Cadillac, Buick and Chevrolet brands in China.

GM said the 4G service will be based onÂ China Mobile's TD-LTE (Time-Division Long-Term Evolution) technology, which provides mobile data speeds up to 10 times faster than the dominant 3G standard. That will enable simultaneous voice and data connections inside the car as well as a broader package of infotainment features.

GM has already been rolling out 4G telematics in North America. The carmaker plans to introduceÂ high-speed connectivity in all its models worldwide in coming years.