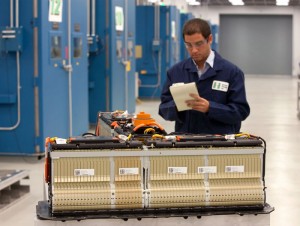 The Chevy Volt has a lithium-ion battery that uses LG Chem technology (Photo:GM)

The CEO of chemicals group LG Chem expects a second generation of batteries to give electric vehicle three times the range they have at present. The batteries will be in production vehicles by 2014-2015, he predicted.

In an interview with The Korea Herald, Kim Bahn-suk said LG Chem, which provides battery technology to the Chevrolet Volt and other electric vehicle models, said his company is developing the so-called "Generation 2" batteries. Production costs of these batteries wil be only one-third of current expenses.

As the market for EV batteries is soaring, LG Chem has doubled its investment in battery operations to 2 trillion won (1.85 billion dlrs) through 2013, up from 1 trillion won originally. "Orders have been piling up faster than we expected," Kim told The Korea Herald.

The Korean chemicals group is aiming for 25 percent of a global car battery market Kim expects to grow to 16 trillion won by 2015. By 2020, the market will be 50 trillion won, he said, adding that further growth will depend on "when and if the electric car arrives in earnest."

LG Chem was one of the first entrants into the market for lithium-ion EV batteries. Kim said the importance of batteries will grow for the company.

"We plan to increase the portion of batteries and information materials to half of our business," he told the newspaper. Currently, 70 pc of LG Chem's revenue comes from petrochemicals.