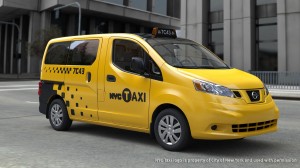 New York will make Nissan's NV200 the exclusive taxi for the city beginning in late 2013.

The Japanese carmaker's taxi vehicle won a competition against Ford and Turkey's Karsan.

Nissan said in a press statement that it will work with the City of New York on a pilot program to study the use of zero-emission electric vehicles as taxis. As part of the project, Nissan will provide up to six electric Nissan Leafs to taxi owners for testing in 2012. It will also provide charging stations for the cars.

The Nissan NV200 taxi will be produced in North America at Nissan's facility in Cuernavaca, Mexico. The taxi will be a modified version of the NV200 compact commercial vehicle currently available in global markets. Total manufacturer suggested retail price (MSRP) with all planned standard features, will be around $29,000, Nissan said.

The carmaker said it would include a range of innovations in the New York taxis. These include a "low-annoyance horn with exterior lights," sliding doors, transparent roof panels and a mobile charging station for passengers that includes a 12 volt electrical outlet and two USB plugs.