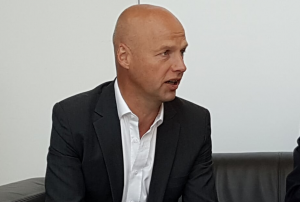 Sebastian Thrun no longer runs Google’s autonomous driving unit, but he is still an active participant in the transformation of the car industry. As president of Udacity, a company he founded in 2012, he oversees the training of a new generation of high-tech specialists. He also continues as an adjunct professor of computer science and electrical engineering at Stanford University. And, as CEO of Kitty Hawk Corp, Thrun is working to realize his vision of an individualized flying experience as a means to get around cities.

“I believe that, for city traffic, airplanes will also provide an alternative,” he said during a visit to Munich last week. “Today, people laugh about it, but I bet the topic will be a serious one in five years.”

Thrun worked for Google from 2007 until 2014. During that period he was in charge of a range of innovation projects and launched the search company’s autonomous driving operations. He is still a believer in the power of new technologies and, in a meeting with a small group of journalists, he exuded optimism about the autonomous-car revolution.

The recent fatal accidents involving driverless cars were sad occasions, Thrun said. “But every new technology comes with risks,” he added. “My hope is that self-driving cars will massively reduce accidents,” he said during the Reply Xchange trade show hosted by digital services provider Reply in Munich.

Thrun cited two major reasons for his optimism. Most accidents occur because drivers make a mistake. “That’s where autonomous cars have an opportunity to do better.” Also, machines have the ability to learn faster than humans and they will avoid making the same mistake again. “I’m absolutely convinced that self-driving cars will be safer than cars driven by humans,” Thrun said. 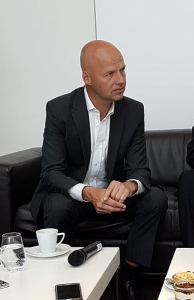 The California-based roboticist also sees major economic advantages from the self-driving trend. For example, highways can be narrower because people’s difficulties with staying in their driving lanes will be a thing of the past. “Machines can do much better on this front,” Thrun said. Autonomous cars will also prevail because they can be operated continuously, thus making them more economical. “Future self-driving taxis will be 40 percent cheaper to operate than a car you drive yourself,” he predicted.

Thrun said fears that jobs will be lost as cars and trucks start to drive themselves are real. “But, historically, machines have improved people’s lives and not made them worse.” The digital revolution will generate new jobs in engineering, teaching, and other areas, he predicted. “We’re already in the middle of a revolution and it hasn’t resulted in new massive unemployment,” he said.

In a half hour exchange of views with reporters in Munich, Thrun was asked whether he thought the traditional auto industry would be capable of changing its business models to adapt to new market requirements. “That’s the 100 million dollar question,” he said. He noted that technology companies such as Google, Baidu, Nvidia and Intel are among the biggest drivers of change in the area of transportation today. But carmakers such as Audi, BMW and Mercedes-Benz are making great strides, he said. “The gap is narrowing.”

Thrun had an interesting take on the important ethics issues that arise in discussions about autonomous cars and their pre-programmed responses to various traffic situations. He said that, once autonomous cars are on the public roads and are proven to be safer than human-driven vehicles, the ethics question may be turned around. “Is it ethical for us people to drive then?”