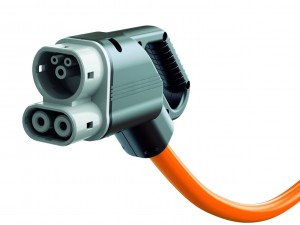 ACEA will make this combined charger the standard for new EVs in Europe from 2017 (Photo: VW)

A group of eight US and German carmakers will demonstrate a common fast-charging technology they hope will accelerate the spread of electric vehicles.

The Society of International Engineers has chosen the single-port fast charging method as its standard and Europe's auto industry association - ACEA - has endorsed the technology. The European associationhas selected the system as its AC/DC charging interface for new vehicle types from 2017.

In a press release, VW said the system, which will allow recharging of electric vehicles in 20 minutes or less, will be available in 2013.

The carmakers hope the standardized charger will help accelerate the development of a charging infrastructure. A network of charging stations is key to the growth of the EV industry because, with limited battery capacity, EVs have a relatively short range before they need to recharge their batteries.

IMS Research, which was acquired recently by IHS, predicted that, in Europe, Middle East and Africa alone, the charging market will grow to 4.5 million units by 2022 from less than 5,000 today.

IMSalso predicted that there will be more makers of charging stations in coming years. Fifty-five percent of the EMEA market is currently served by three companies: Schneider Electric, PodPoint and ABB, but IMS said in a press release that "this should not be viewed as the status quo."

The design of the combined charging system takes into account US and European preferences. It was developed for international markets.