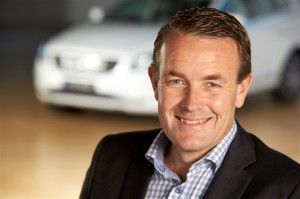 Volvo Cars CIO Klas Bendrik has been promoted to a new senior vice president position, as the Swedish carmaker acknowledges the growing importance of IT across its model lineup. The move underlines "the key role technology will play for carmakers in future as they develop their connectivity products and services," Volvo said in a press release.

The promotion was expected after Bendrik presented the Volvo vision for connected cars at the Mobile World Congress in Barcelona last month. At the event, Bendrik outlined the various technologies the carmaker is developing. And he highlighted the safety and mobility improvements IT could bring to all forms of transportation. “Car makers have the potential to deliver real benefits to society by democratizing anonymized car data," he said in Barcelona.

Volvo on Monday also announced more details of a simplified global management structure, with three business regions each managed by a senior vice president. Former product boss Lex Kerssemakers is in charge of the Americas; Asia - including China - is headed by China boss Lars Danielson; and Europe, Â the Middle East and Africa, will be run by Anders Gustafsson, currently president of Volvo Cars Sweden.