VW does research on projects such as the "mobility companion" at its California electronics lab (Photo: VW)

The Volkswagen Group is making an additional 1.7 million dlrs available to Stanford University to explore new areas of automotive innovation.

The grant marks a continuation of the cooperation between the German carmaker and the California-based university.

VW said new research will begin at Stanford in the areas of virtual intelligence, new materials, data security and vehicle dynamics. Stanford will also use the funds to launch programs aimed at educating computer science and electromechanical design engineers.

The cooperation between VW and Stanford will pave the way for "next-generation solutions that will transform the vehicles of tomorrow,” said Peter Oel, executive director of VW's Electronics Research Laboratory, which was established in 1998.

In 2009, VW made an initial investment of 5.75 million dlrs to establish the Volkswagen Automotive Innovation Laboratory (VAIL) 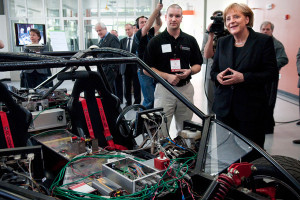 on the Stanford campus. In the past four years, the lab has worked on research projects including autonomous transportation, vehicle dynamics, safety, and environmental performance.

Volkswagen Group also operates an electronics lab in nearby Belmont, California.The carmaker provides access to the lab to Stanford researchers who collaborate on specific research projects.