Jaguar I-Pace to start driverless tests with Waymo this year 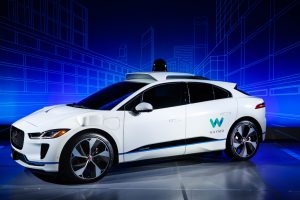 Waymo plans to include up to 20,000 driverless I-Pace cars in its fleet (Photo: Jaguar I-Pace)

The Jaguar I-Pace will become part of Waymo's driverless fleet in 2020 and tests with a self-driving version of the SUV will start this year already.

The two companies said up to 20,000 I-Pace SUVs will join Waymo's fleet in the first two years of production.

The announcement came as the industry is reassessing the timetable for autonomous driving in the wake of two deadly accidents that occurred in the US. One of them involved a Volvo SUV that ride-hailing service Uber was using in Arizona. The other involved a Tesla SUV crashing on a California highway, killing the driver.

In the wake of the Arizona accident, several companies suspended driverless testing on public roads.

JLR and Waymo said they would start testing driverless versions of the I-Pace later this year. The ability to capture real-word data will allow them to optimize the technology, they said.

JLR CEO Ralf Speth said his goal of "further advancing smart mobility" will come one step nearer through the cooperation with Waymo. "In joining forces with Waymo we are pioneering to push the boundaries of technology," he said.

Waymo CEO John Krafcik said in a press release that the I-Pace's new battery-electric platform will set "a new standard in safety, design and capability."

The I-Pace is Jaguar's first model designed from the outset as an EV.