Ford, Honda and Volkswagen get smarter at crossroads 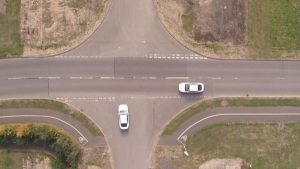 Ford, Honda and Volkswagen have demonstrated or announced vehicle-to-vehicle (V2V) and vehicle-to-infrastructure (V2X) trials this week. These are all intended to explore technologies to ease traffic congestion, smooth out traffic flow and increase safety and efficiency; and while they currently involve alerts (and later, interventions) to human drivers, in the longer-term the technologies will be applicable for autonomous vehicles.

Ford demonstrated its Intersection Priority Management (IPM) technology [pictured] in Milton Keynes, UK, this week. This V2V technology is said to have been inspired by the way humans negotiate their path through busy crowds, slowing down or speeding up as necessary: it suggests optimum speeds which allow cars to safely pass each other at intersections, based on their location, direction of travel and speed. “We envisage a world where vehicles are more aware of each other and their environment, enabling intelligent cooperation and collaboration on the roads – and around junctions,” said Christian Ress, supervisor of driver assist technologies, Ford Research and Advanced Engineering.

Honda, meanwhile, demonstrated its own Smart Intersection V2X technology in Marysville, Ohio. This is said to allow vehicles to ‘see’ through buildings and walls, even in challenging weather conditions, using object recognition software in partnership with cameras mounted at intersections. These cameras capture a birds-eye view of surrounding vehicles and pedestrians within a 300ft range, which is processed to create a 360-degree virtual image with vehicles and other moving ‘objects’ – including motorcycles, pedestrians and emergency vehicles – all classified. The data is broadcast to the connected vehicles using DSRC, then decoded by their on-board computers for alerts to be issued as necessary.

Ted Klaus, VP of strategic research, Honda R&D Americas, said in a statement: “Honda believes that V2X technology is an essential component of a smarter and safer transportation ecosystem and can play a role in our dream for a zero-collision society.”

Volkswagen at crossroads with Siemens

In Germany, Volkswagen is working with Siemens on a V2X project using WLANp (ITS-G5). A test section on a main road in Wolfsburg, Volkswagen’s home city, will trial ten traffic signal systems which will broadcast their light phase status. The WLANp-equipped cars will be able to process that information and inform the driver so they can progress smoothly, minimising acceleration, braking or stopping. Two crossroads will also be equipped with radar sensors to detect pedestrians and cyclists.

Manfred Fuhg, head of Siemens Mobility Germany, said: “Crossroads equipped with radar sensor technology are able to significantly increase accuracy in the detection of pedestrians and cyclists. Information that vehicles are not able to detect themselves is provided at complex intersections and accident blackspots in particular.”

The next phase of this project, from 2019, will be to add AI-enabled functions whereby the systems can intervene. “Based on systems with artificial intelligence in traffic signal systems, intelligent control methods can provide vehicles with much more precise information on red and green phases than was previously possible,” added Fuhg.